Shaken cohorts Matt Lauer and Katie Couric came in on their day off - Lauer to New York's Rockefeller Center, Couric to NBC's Washington bureau - to stifle tears on "Weekend Today," a show Bloom had co-hosted for three years, and reflect on the loss of their war hero.  Suddenly the emotional investment was real.  Couric called the news "heartbreaking and shocking."

"There was no one more devoted to his calling ..."
 BOB WRIGHT NBC chairman and chief executive.

David Bloom's wife: My husband should be living today. 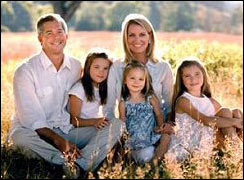 March 3, 2005 — Melanie Bloom, the wife of former NBC correspondent David Bloom, on preventing the often-silent killer DVT.  After David died in Iraq, Melanie asked herself some questions.  "Why did this happen? Could it have been prevented? As she learned more about Davids condition, an aching truth emerged. This is preventable and treatable. "Theres every reason to think my husband should be living today, had we known of this danger."

Disclaimer: Articles, letters, satire, and other content do not necessarily reflect the editorial position of UnitedJustice.com or Radok Corporation, and accordingly cannot be held accountable for the views of some content contained herein.